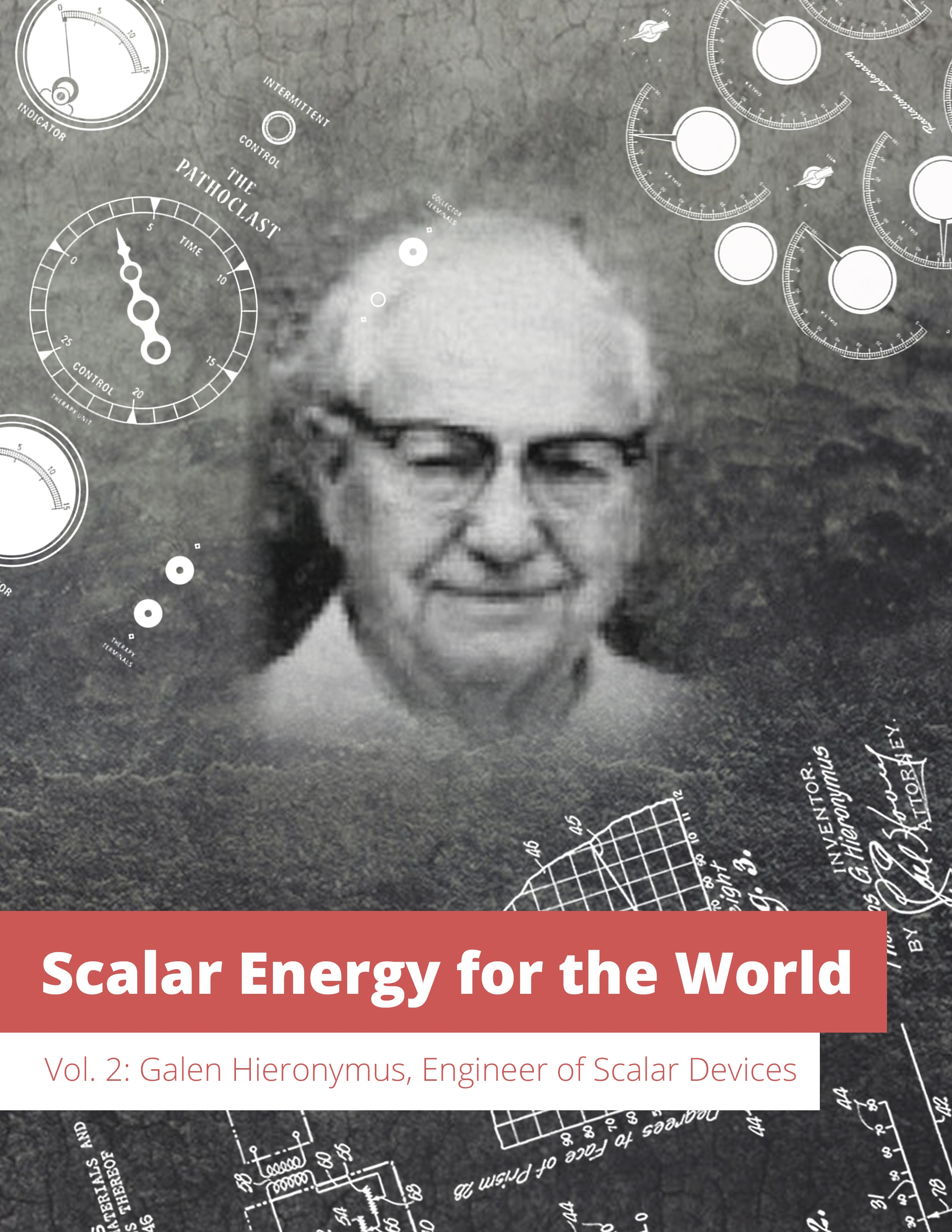 Preface
Nikola Tesla may have been the father of Scalar Energy, but he wasn’t the only person to
discover its existence. As a young engineer in Kansas City, a man named Thomas Galen
Hieronymus was asked to build some unusual electrical devices for his neighbor, Dr. Planck.
Later, he discovered that the devices were radionic instruments, first introduced to the world
by Dr. Albert Abrams of San Francisco. This sparked his interest in radionic technology and set
his mind on the objective of learning more.


In 1949, after researching and building his device for years, Hieronymus became the first and
only person to ever successfully patent a radionics machine. He believed that his device
detected a previously unknown form of energy that was emitted continuously by all elements.
Once calibrated, he found that he could use the device to identify unknown mineral samples.
The circuitry in this device utilized both electrical and optical components.
When the patent official requested that the energy harvested have a name, Hieronymus
thought of two words that pertained to his device: Electricity and Optics. Rather than using
both, he combined them, creating the term, Eloptic Energy.


Little did he know…Tesla had already discovered and named it Radiant Energy, which would
later be renamed Scalar Energy by nuclear engineer, Tom Bearden. Still, Hieronymus’ device would be the next step in a revolution.


BUT, he wasn’t just a pioneer of scalar energy; his lifelong effort has served to introduce to
mankind a seminal understanding of this fundamental force in nature that we may not know so
well otherwise.

Who was he?
Thomas Galen Hieronymus was born on November 21, 1895 in Valparaiso, Indiana. As a young
man he developed an interest in radio communication and subsequently became one of the
first licensed radio operators in the United States of America.


Later, he worked as an engineer at the Kansas City Power & Light Company where he
developed the phase-locking system that serves to connect power stations.


Hieronymus’ engineering prowess was also called upon by the medical profession in order to
build medical diagnostic instruments. These medical instruments utilized scalar energy in order
to diagnose and reverse disease conditions with a high degree of accuracy and efficacy.
One of his most important creations was the Cosmic Pipe, which he believed attracted a
downward flow of cosmic energy from the ether. But… how did he discover such a thing?


Well, the inspiration for cosmic pipes came from an early experiment by Hieronymus, in which several cigar boxes were filled with soil and grain seeds before being placed in a basement. Some boxes had copper plates
installed in the lids, and some of these were connected by wire to a large copper plate mounted on the roof of his home. The seeds in all boxes germinated, but only those connected to the roof plate grew sprouts that were green and healthy. Hieronymus reasoned that cosmic energy was responsible for the healthy growth.


Expanding on this idea, Hieronymus crafted many more cosmic pipes over the years. He eventually added a reagent well in which specimens could be placed. He would then study the vibrational patterns from the
specimen as it drew forth the energy and broadcast it into the soil.


As you might imagine, this device was sold to an unverifiable amount of farmers for use on their crops, but it was only the beginning of Hieronymus’ foray into ‘scalar energy.’

Assembling Physical Matter
During the course of his work, Hieronymus discovered that ‘scalar energy’ was responsible for
assembling physical matter from the ether. He concluded that even protons, neutrons, and
electrons were assembled from the ether and subsequently disassembled back into the ether
by way of ‘scalar energy.’ He explained this subtle process by stating:


“Just as the ether can be caused to vibrate at different bands of frequencies to manifest as
electricity, radio, heat, light, ultraviolet, etc., so can the Fine Media (scalar energy) be caused to
manifest in many ways.


When the Fine Media (scalar energy) is properly influenced, it can be caused to coalesce to the
point where material units such as electrons, protons, and neutrons are formed.


When these units are desired to be grouped together, a still further manifestation of the Fine
Media (scalar energy) takes the form of the cohesive force necessary to form the units into
elements such as helium, iron, gold, and uranium. A still further manifestation of the cohesive
force is necessary to form elements into compound or complex groups.”


To underscore that point, many of the instruments that Hieronymus invented utilized electricity
as a power source that subsequently converted electrical current into ‘scalar energy.’ Another
fascinating property that Hieronymus discovered was that the angle of ‘scalar energy’ refraction
is in relation to the atomic mass of an element. That is, the greater the atomic mass of an
element, the greater the angle of refraction. Hieronymus described this phenomenon of ‘scalar
energy’ by stating:


“Radiation (scalar energy refractions) from hydrogen passes through the prism at the sharpest
angle or at the lowest degree measured from the face of the prism. Radiations (scalar energy
refractions) from other elements and their isotopes pass through the prism at greater angles
but in the same order as their atomic weights — the heavier the element or its isotope, the
wider the angle.”


Hieronymus went on to analyze ore samples by way of ‘scalar energy’ with a high degree of
accuracy in order to ascertain the elements contained therein. Subsequently, the ‘scalar energy’
analysis of ore was verified by more conventional chemical and spectrographic analysis and
found to be accurate.

Diagnosing a Difference
Analyzing ore samples and helping plants grow were only the first steps that Hieronymus would
take. He also observed that each organ or tissue in the human body possessed a unique ‘scalar
energy’ harmonic, and that the level of vitality of an organ or tissue could likewise be
ascertained by way of ‘scalar energy’ analysis. Furthermore, when an organ or tissue was
diseased, that disease condition also possessed a unique, ‘scalar energy’ harmonic that could
be diagnosed by Hieronymus’ instruments.


Hieronymus was able to utilize a photograph of a person as well as their blood, urine or hair
sample in order to diagnose a disease condition without that person being physically present.
In many instances, Hieronymus was also able to utilize a photograph of a person or their
biological sample in order to broadcast the reverse-phase angle ‘scalar energy’ harmonic of the
disease condition back into a person, thereby negating the condition. Thus, Hieronymus’ (scalar
energy) instruments were utilized in order to diagnose and to subsequently palliate disease.

Experimenting with Scalar Energy
Throughout his lifetime, Hieronymus conducted an extensive number of ‘scalar energy’
experiments that served to demonstrate the profound nature of this primal force that
emanated from the Sun of our solar system as well as the stars of the universe. These
experiments and their subsequent discoveries were made possible by the (scalar energy)
instruments that he invented and perfected over the course of a lifetime of engineering
excellence. Some of Hieronymus’ experiments are listed below.


Hieronymus’ ‘Scalar Energy’ Experiments
1. A ‘scalar energy’ cosmic pipe was developed in order to mineralize the soil by
transmuting the elements and minerals without the need for chemicals or fertilizer.


2. ‘Scalar energy’ was utilized to grow plants in the dark devoid of any source of
electromagnetic light thereby proving the role that scalar light has in the process of
photosynthesis.


3. A ‘scalar energy’ instrument was used to track and monitor the Apollo 11 astronauts
during their lunar mission. The astronauts were tracked and monitored exclusively by
way of their photographs.


4. Pathogens and insects were routinely disassembled by way of a ‘scalar energy’
instrument, thereby removing disease in people, animals, trees, and plants.


5. A ‘scalar energy’ instrument was utilized in conjunction with aerial photographs in order
to locate people and objects. Hence, ‘scalar energy’ is capable on locating any missing
person or object anywhere in the world.


6. Insects that posed a threat to the crops were eradicated from farms by way of a ‘scalar
energy’ instrument.


7. A ‘scalar energy’ instrument was utilized in order to transfer the genome of a pecan
tree into a walnut tree. The result was a hybridized walnut tree that possessed the
genetic make-up of both a walnut tree and a pecan tree.

What Comes Next?
Not only was he a pioneer of ‘scalar energy,’ but the accomplishments of Thomas Galen
Hieronymus are astounding and have served as an impetus to advance scalar energy research
and development.


Given this, it can be argued that Hieronymus was one of the geniuses appointed by God to
introduce the divine light—scalar energy—to mankind. Now, mankind must acknowledge and
embrace the divine light and incorporate this heavenly gift into the fabric of everyday life.